"We making him hot by talking bout this toller Typ"

Lil Wayne Says Drake Had Sex With His Girlfriend 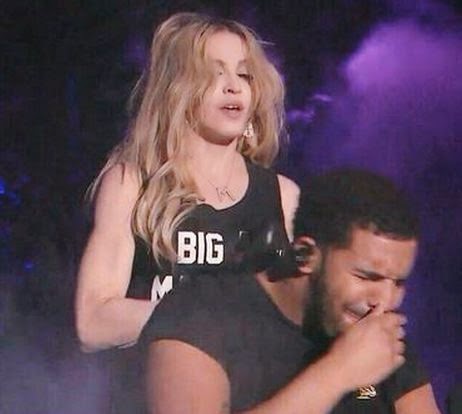 "Drake n Madonna kissed on stage at Coachella" is basically the politically correct/naive ass way of sayin "Madonna done performed her black widow voodoo ritual on Aubrey as a way to help prolong her career by ending his n now this fool basically bout to fall the fuck off any minute". I'm sayin he coulda jus played it safe n followed in the footsteps of some admirable cats like 3 Stacks, Common, n Jay "What Album?" Electronica n let Erykah Badu put that hex on him instead... Worst that could happen is he might start rockin dashikis n turbans n makin some shit that Afrika Bambaatta n the Soul Sonic Force would be proud of. I mean Kendrick jus held Erykah's hand on stage for 12.5 seconds at the BET awards n even THAT was enough to influence son to forget bout all the "Good Kid" shit he was on n come back as the torchbearer for 90s Afrocentric n Black Panther inspired hip hop callin hisself some incendiary ass shit like "King Kunta" on the blackest n most provocative "mainstream" rap album of the last 5 years. I mean history done proved this theory time after muthafuckin time namsayin... Britney let Madonna stick her tongue down her throat n next thing ya kno she all over the news whylin out shavin her dome n beatin cars witta got damn umbrella n shit. Christina Aguilera aged damn near 27 years after Madonna sucked her soul outta her mouf... Meanwhile Big Daddy Kane was so overjoyed to be ménage'n wit her n Naomi Campbell that he aint even notice his entire music career vaporize right before his eyes n shit. Then there was Pac.......... PAC FUCKIN DIED B.
Im Tellin yall this shit ain't gon end too good for ya boy Drizzy tho... Lets jus hope that Tyga lets Madonna smash at some point so that sumthin positive can derive from this shit for once.
Aight peace.
#Drake #Madonna #Coachella #FuckTyga
Klick für mehr...